On Thursday 11 July, five Year 12 pupils represented King David at a Mathematical Modelling Workshop at the University of Liverpool.

Students took part in a series of activities designed to extend their mathematical problem-solving skills to a wide variety of real-world applications.  They explored how tide times at Hilbre Island might be modelled mathematically, and used the smartphone app ‘Desmos’ to model the cooling of a hot drink with an exponential function. They also used circle geometry to learn about the ‘sag’ in overhead power lines (with some surprising results!) and calculated the optimal dimensions of a baked bean tin to minimise the metal used.

The final workshop utilised the students’ Mechanics skills to investigate the maximum possible overhang of a stack of Jenga blocks from the edge of a table!  After lots of experimentation, they discovered an important relationship with the harmonic series, and quickly realised they could achieve much larger overhangs by using some blocks as counter-balances.

The students really enjoyed the day and were a credit to the school. 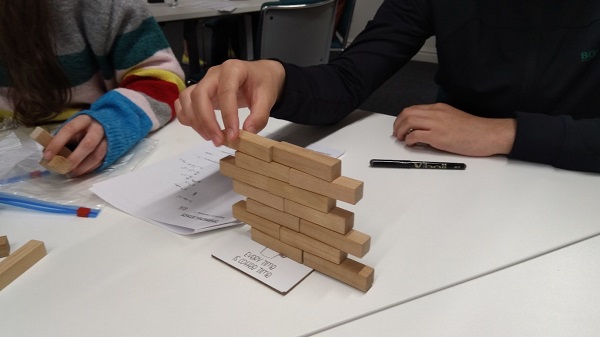