Students from Y12 attended the Liverpool Mathematical Society Lecture on Thursday 12th December.  The title of the lecture was “It’s all Greek to me” and Dr Tom Crawford (University of Oxford) explored the theories of Archimedes, Plato and Pythagoras, all while dressed in a toga.  Of particular interest to the students were an explanation of the five Platonic solids, understanding buoyancy and Proof by Contradiction (which is a topic on the A level Maths curriculum).

Did you know….that it would take 1.498 billion ping-pong balls to raise the Titanic?  You can work this out using Archimedes’ theories and knowing that the Titanic has a mass of 47.5 million kg.  It would not work though because the ping-pong balls would collapse under the pressure. 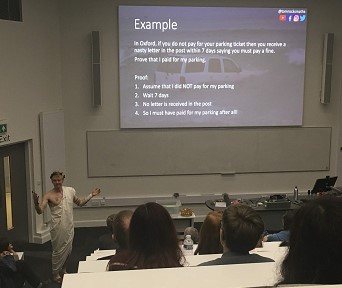